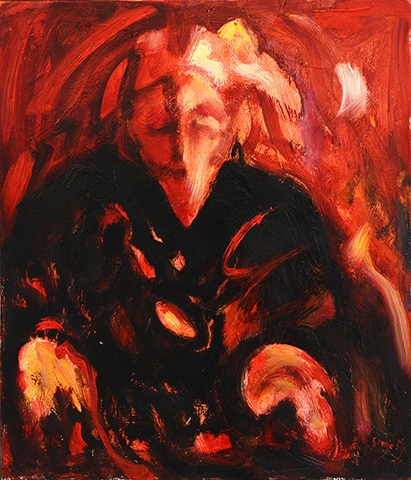 Our friend and master mask-maker Sergio Boldrin is exhibiting his paintings at Galleria All’Oleandro Rosa near La Fenice,

“Observing the city, through the eyes of a melancholy jester’s mask that has witnessed (and continues to witness) the fading of his Carnival and, above all, his Venice. An accusatory painting emerging from worried, and worrying brushstrokes that pummel the city’s buildings, twisting them and stretching them upwards until they become malleable archaeological memories of a monochrome necropolis.

There is passion, anger and pain in these (German) expressionistic visions of Venice that rewrite a city shaken by barbarian invasions and the indolence of the new “Doges”…Sergio Boldrin, Venetian, master of the mask-making craft, is fooling neither us, nor himself. For thirty years he has exercised his craft in his workshop at the foot of the Rialto bridge, the perfect spot to observe the gradual degradation and mark the slow death of what was once a city. He has worked for film-makers – we need only mention his collaboration with Stanley Kubriclk – for the theatre and for fashion. His fame has spread far and wide and his masks can be found in collections all around the world-

A “playful” craft that he combines with his artistic explorations and his desire to express an emotion, a warning and, perhaps a ray of  hope. It it’s not too late… ”

THE PAINTINGS OF SERGIO BOLDRIN HAVE BEEN FEATURED IN