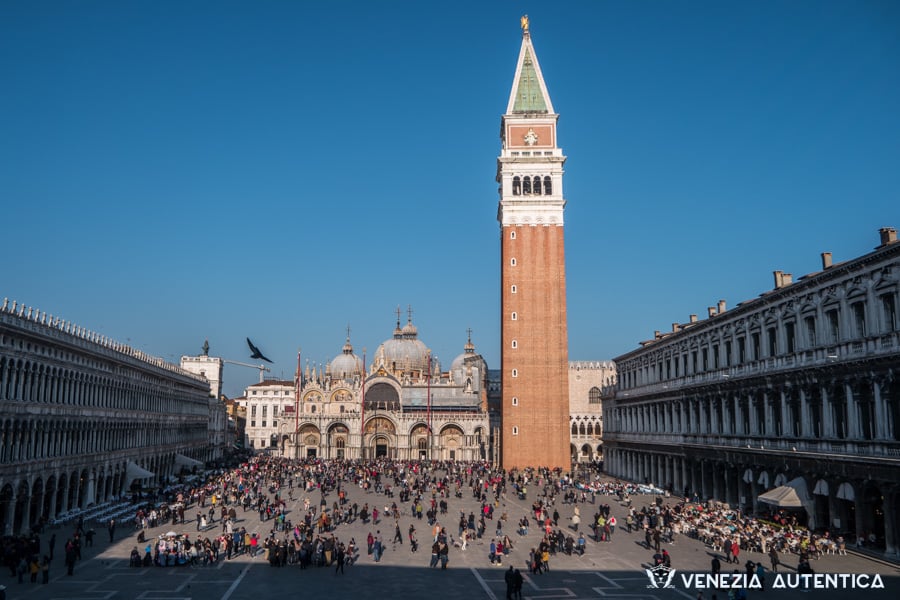 There is only one spot in Venice from which you can see all, and we mean all, the city and the landmarks at one glance: that’s the Saint Mark’s Bell Tower, also known as “Paron de Casa” or “Landlord” by the Venetians.

First built in the 9th century, it was used as a watch tower and lighthouse for the dock which was in the position where now is the Piazzetta.

Since the sixteenth century, the bell tower measures 98,6m in height, making it the tallest building in Venice.

In over a thousand years of existence, the campanile was struck by lightning several times because of its height, and it was severely damaged on 10 occasions, the last of which in 1762. Since 1772 the bell tower has a lightning conductor.

The brick construction itself is 50m tall, above which is a loggia with five bells, another bricks level, and ultimately a long and sharp and tall pyramidal spire topped with a 3 meters tall golden statue of the archangel Gabriel, which also works as a wind vane.

The campanile was rebuilt from scratch and inaugurated in 1912, after it collapsed entirely to the ground in 1902, leaving the Venetians and the whole world in shock. Luckily, no person died or was injured in the accident but, unfortunately, the only thing that survived this incredible accident was the main bell, the “Marangona”: a 3600kg craft which signaled to the Arsenale workers the beginning and the end of the working day.

Even though the Campanile had to be entirely rebuilt, its style was entirely preserved as it had been since the final version of the sixteenth century, after the restorations made to repair the damages caused by an earthquake on March 1511.

This extremely conservative restoration has been the result of the immediate motto that every Venetian adopted after the tragic fall: we want it “dov’era e com’era”, where it was and how it was.