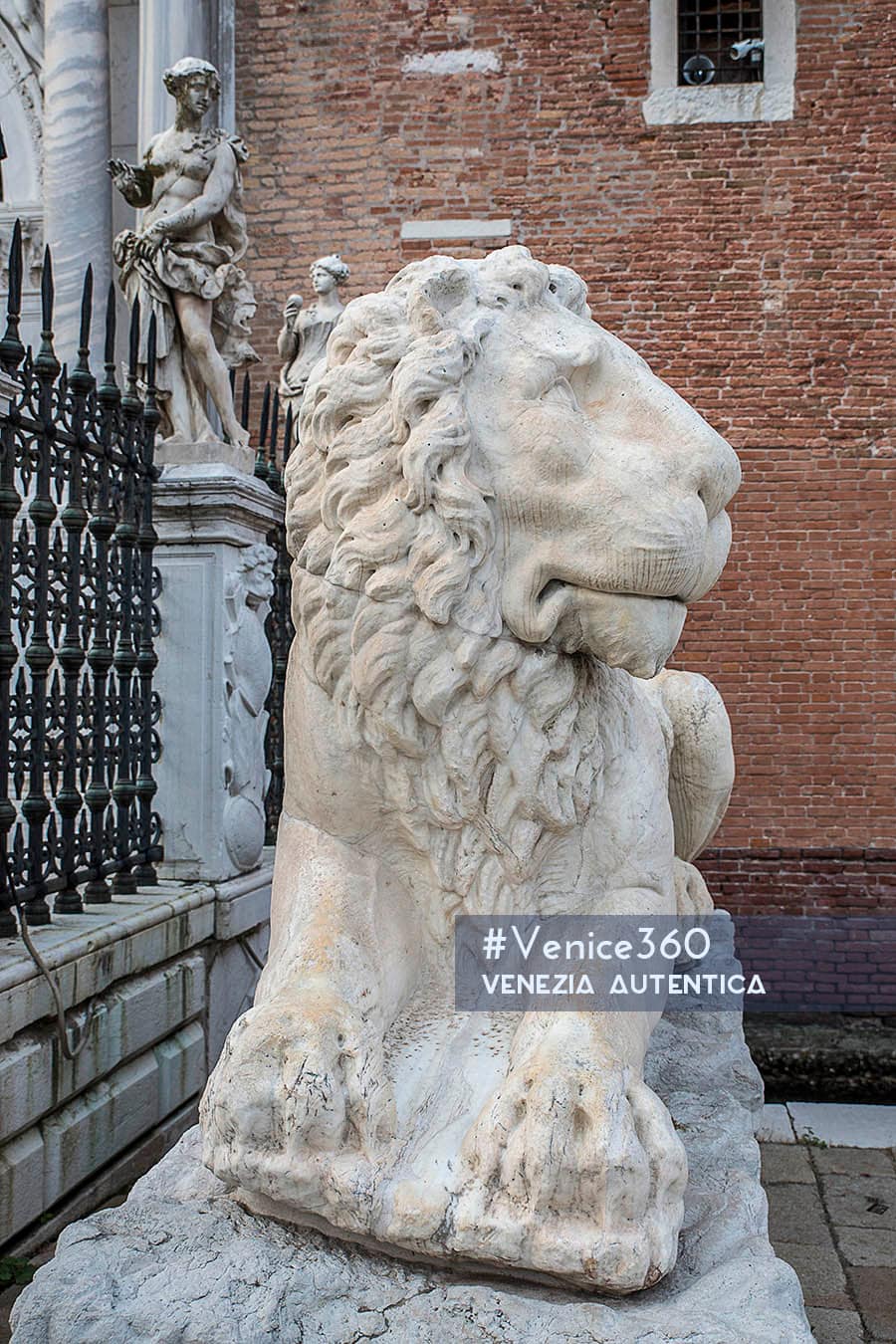 In front of the Arsenal can be found imposing lion statues, protagonists of an interesting Venetian legend…

In November 1719, after two very stormy days, two devastated bodies were found close to the Arsenal. The police first thought about an attack carried out by big animals living in the neighborhood but had to exclude the hypothesis as no evidence was found.

Six days later, after another stormy night, a new torn corpse was found: it was Jacopo’s body,

a young petty thief who lived close by with his wife Giovanna. Hearing this news, the Venetians started panicking: was there a serial killer in town?

Since the area belonged to the Marine’s jurisdiction, the young captain Enrico Giustiniani took charge of the investigations.

Two days after the last murder, Enrico, on his way back to the Arsenale, heard a quarrel and went closer to hear the dispute: Giovanna was yelling at the windows of a tall house, belonging to an old merchant, Fosco, who was said to be a usurer. Her words were the following: “I know you are responsible for that, you are the killer!”, and she would not let anyone calm her or bring her away. When she finally did, Enrico saw one of the windows opening and Fosco, with a furious face, whispering “Beware, woman! Your arrogance will be punished on the next stormy night…”.

After lip reading these words, Enrico obviously started to suspect Fosco, even though it was absolutely impossible that such an old man could have harmed the three victims in such a way! Further investigations were therefore needed, and Enrico spent days observing the house, from which Fosco was never stepping out. After some time, deciding it was no longer worth his time, Enrico reoriented his investigation to, instead, follow and observe the movements of Giovanna who had started prostituting herself.

SEE ALSO  Venice and its Lagoon

After 10 days, a new stormy day took place and lasted until night. Remembering Fosco’s threat, Enrico went out at night and hid in the shadows close to the Arsenale to keep an eye on the square in front of the gate. Suddenly, after few hours, at 1 a.m., a fire arch formed in the sky and Fosco materialized in the middle of the square. The old man immediately bewitched the guards keeping the Arsenal’s gate, to then slowly walk towards the lions and pass a hand over them, muttering old enchantments. A shiny globe appeared midair and one lightning struck the first lion. The young captain was speechless: slowly, the big marble lion was coming to life!

It was at that time that Giovanna and her friend Jolanda, turned a corner and came walking down the street leading to the square of the Arsenale. When a second lightning struck the other marble lion, they saw the silhouette of the first gigantic lion running towards them. Enrico, still paralyzed in terror, forced himself out of his hiding place to run to the scene, at the same moment a third lighting struck the last lion and enlightened a horrific scene: the first lion was tearing Jolanda’s body apart. The captain took out his sword, and run to Fosco, who barely managed to turn around, only to find himself stabbed to death by Enrico’s blade.

A gigantic roar and a blinding light exploded, and everything went quiet, only the rain continued to pour down. Nothing was moving anymore: The lions transformed back into stone, the devastated body of Jolanda could be seen lifeless on the floor, Giovanna herself was laying down in shock. Next to the sword of Enrico, on the ground, was a heart of stone. It was Fosco’s heart, the center of the power of the man, which was allowing him to turn stones to life.

If all the lions had gone back to stone, the head of the third lion, however, was still alive, continuing to roar and bite at the top of its marble body. Seeing so, the courageous Enrico, again, didn’t think twice and picked his sword from the ground to cut the lion’s head which flew high into the air and exploded in thousands of pieces.

Investigations after this terrible night made clear that Fosco was not only a usurer, but also a wizard who had been fooled by Jacopo, and wanted revenge. He had chosen to kill the other two men first, to make the investigations more difficult. Giovanna who had seen through his plans also had to disappear.

Unfortunately, even though Giovanna survived, she could never lead a serene life and had to be taken to a madhouse.

Do you have some doubts about this story? Do you need a proof to believe it? Well then, check out the lion’s head!
As we told you, the original head exploded in thousands of pieces and it was replaced by a new one, as can be clearly seen in our picture…